About Durian
How to Eat
FAQS
Recipes

We live for memorable fruit experiences at FruitStand. If you do too, durian is a must-try. Tasting durian at least once is an experience that we think everyone should have.

Known as The King of Fruits throughout its native Southeast Asia, durian (Durio zibethinus) is prized for its distinctly funky and aromatic fragrance and flavor profile. The custardy sections of dense durian fruit are protected by a sharp and thorny outer rind of green spikes. Durians are quite large and can weigh up to seven pounds!

There’s no getting around it - durian is not for the faint of heart. But with an adventurous spirit and an open mind, you may be rewarded with your new favorite fruit. Keep reading to learn more about the rare and complex durian! 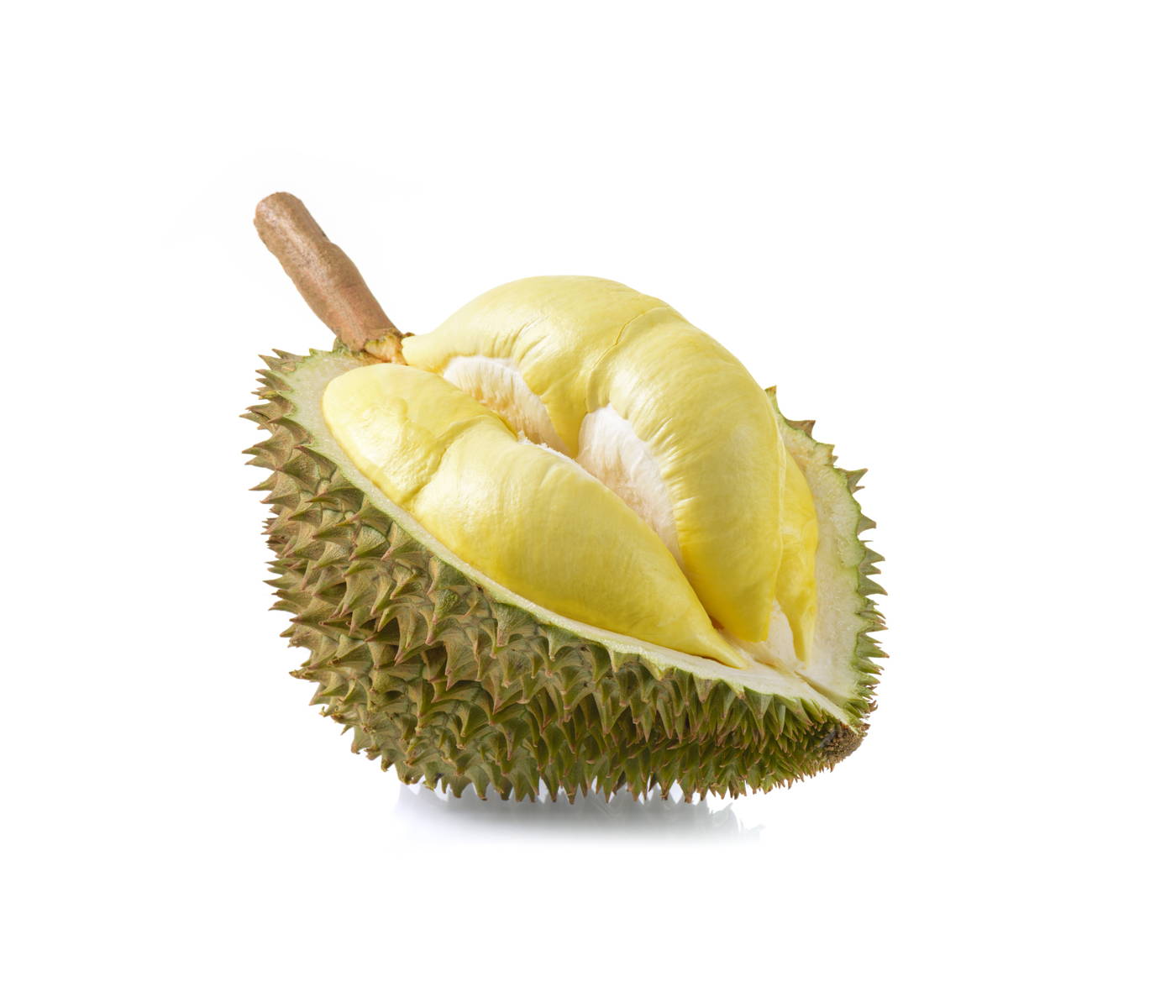 Fragrant, thorny and bulbous, durian is a large tropical fruit native to Borneo and Sumatra that has a showy rind of spiky green thorns. Inside, individual sections of dense durian fruit, called arils, are known for their complex flavor that is starchy, sweet and savory with an oniony heat that has a slight numbing effect.

Durian’s reputation precedes itself, literally and figuratively, due to its strong signature odor. To some, durian fruit’s pungent fragrance is a crave-worthy amalgamation of funky cheese, tropical sweetness and fresh aromatic vegetables. To others, it smells like a less-than-enticing mashup of hot garbage, teenage body odor and raw onions with a squeeze of putridity.

Once you accept the olfactive experience of it, many people say that durian tastes much better than it smells. While encouraging, it sounds like a low bar. Those who love the king of fruits say that the complexity of the durian flavor is what makes it their all time favorite.

When you try durian for the first time, you’ll actually feel a physical numbing sensation on your tongue that’s similar to eating raw onion, accompanied by an aromatic flavor of garlic and chive. Durian fruit’s texture is somewhat custardy and creamy, with a somewhat sugary flavor. According to Lindsay Gasik, a durian-obsessed writer and travel guide, “It’s supposed to taste like diced garlic and caramel poured into whipped cream.” Yummy!

Some say that you can subsist entirely off of durian. Until then, begin by eating durian raw or in an array of sweet recipes in which durian is predominantly used like sticky rice, ice cream and pastries. Durian is also popular in savory Southeast Asian cuisine in recipes like curries, fritters and rice dishes.

Usually prepared by boiling, durian seeds are edible when cooked. Baked and boiled durian seeds are often described as having a starchy and slightly fibrous texture and a mild, starchy flavor.

Durian is a fruit best described by those who eat it. Everyone who tries durian has an experience they won’t soon forget! That’s precisely why we think you should try durian. Keep checking our website for alerts on when we’re shipping!

Where Does Durian Grow

Durian fruit grows natively in Borneo and Sumatra, and is cultivated throughout Southeast Asia in countries including Thailand, Indonesia, Malaysia and Singapore. Durian fruits grow on a tall, tropical tree that is part of the hibiscus family.

When Is Durian In Season

Durian season begins in the second half of the year and lasts from June to September. The relatively short season for durian peaks in July when it is most plentiful. The exact timing of the durian fruit season will depend largely on the species and location where it grows.

Whether a durian is certified organic or not will depend on the particular grower. FruitStand only partners with responsible specialty farms for exceptional quality of produce. When each harvest is available, we'll tell you whether the fruit is considered organic or conventional.Still curious about durian? Send us your durian questions and unboxing videos any time on Instagram @Fruitstandcom!