When vanilla fruit is harvested, it is a green pod—like a green bean—that is just beginning to ripen. At that stage, they do have a fragrance, but it is not a vanilla fragrance. The vanilla fragrance and flavor is developed in the curing process, which involves keeping the beans warm and moist for a couple of weeks.

During that time, an enzymatic reaction takes place in the bean which converts the raw glucovanillins into glucose and vanillin. Vanillin is the fragrance and flavor of vanilla, so the curing process is designed to optimize the production of this chemical in the bean as it cures. Glucose also performs an important function in preserving the bean.

Once cured, you have the whole vanilla bean which is used to make vanilla extract, powder, sugar, syrups, and infusions. 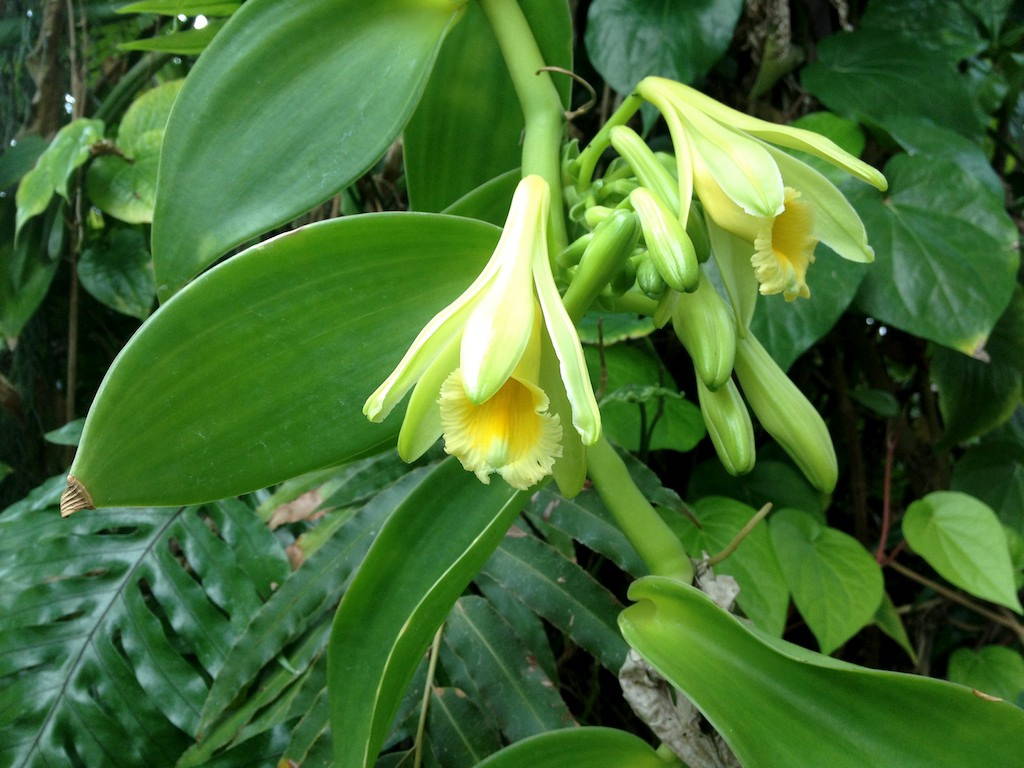 Vanilla, Vanilla planifolia, is actually an orchid—the only orchid that produces something used for food. Unlike other orchids, it is also a fast-growing vine. The plant originated in Central America and was used by the ancient Maya as an additive to cacao beverages, although really very little is known about how they used it or how they cured the pods.

The Maya wildcrafted their vanilla, which was pollinated by a special type of bee, the Melipona Bee. The Maya—past and present—use this stingless bee's honey medicinally. Keeping these bees and producing the honey is an ancient artisanal skill that is only practiced in southern Mexico and Guatemala.

Melipona bees are not present in any of the other vanilla growing areas, so vanilla is hand-pollinated in most of the places where it is grown. At the Vanillery of Kaua'i in Hawaii, all of their vanilla is hand-pollinated. Each flower only lasts several hours, so pollination has to be done every morning prior to the flower wilting. If the flowers aren't pollinated, they will die without producing a vanilla pod.

The vanilla that is actually pollinated by these bees is what we know as Mexican vanilla. It is the same plant as bourbon vanilla, but pollinated by bees rather than hand-pollinated.

Where Does Vanilla Grow

When Is Vanilla In Season

Vanilla is very seasonal in how it grows, although the seasonality differs depending on the region. In Hawaii, the plants flower in spring from March through June. The flowers that are pollinated will produce a pod that will be ripe the following winter, so it takes about 9-10 months for a pod to ripen. Pods are harvested from January to May then put through the curing process, available for use starting in July. So, the total process from flower to availability is at least 14 months.

The vanilla from the Vanillery of Kaua'i is not certified organic. For the past 16 years, however, they have been using organic farming methods including permaculture and Korean Natural farming methods—which is another holistic farming method using indigenous microorganisms. They make all the soil amendments using plants that grow on their land making compost teas and ferments that promote the growth of the mycorrhiza. So, you can rest assured that no pesticides or harmful chemicals have been used in the growth of this vanilla.